The side effects of anti-malarial medications include nausea, but I am pretty sure that the roads in Kaliro District give the locals a little upset stomach too.  Our ride from Mbale was two hours, about twenty minutes on paved tarmac and the remainder on a dirt road more resembled the moon’s surface than it’s paved cousin.  While our driver, Issa, operated the car with care for his passengers and automobile, it’s hard to imagine how we don’t get a flat or ground out.  On that fact alone, Issa is perhaps more than man; afte two hours in the dirt road paved bush, driving through fields of crops and small trading centers, we arrived at Buyinda Health Center. 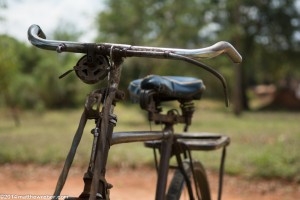 The preferred form of transportation in Kaliro District is car, but most people either have a bike or walk

The Kaliro district is host to several IA panels, from the Buvundya and Kaliro Orphanages to Nabigwale Health Clinic.  The district has lots of caring, responsible communities that express deep reverence for the the panels, keeping them maintained and properly cared for by a volunteer committee at each location.

When we arrive to the clinic, a district health vehicle is delivering medical supplies and infant and child vaccinations were taking place.  Nurses and trained vaccination officers were providing recently arrived immunizations to local children.  Because Buyinda health center is off the grid, there is no where to store the vaccines on site.  They are instead driven in on specified vaccination days from Mbale. 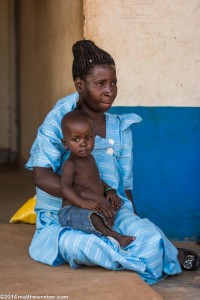 A mother and child await a vaccination at Buyinda Health Clinic

We met a few mothers who were willing to speak with us.  One, Sara, lived nearby the clinic, close enough to walk.  We asked to see her home and meet her family.  She explained that she left her husband recently and moved back with her mother and father.  She sleeps with her six children in a small, mud hut with a dirt floor used during the day as the family’s kitchen.  They sleep side by side, barely fitting and lay on a bamboo mat that they roll out each evening.

Sara and her youngest child after vaccination at Buyinda Health Center

The family owns a tiny portion of land, not enough to sustain the children’s growing hunger.  In spite of their poverty, the family works together, cooking, cleaning, farming, and playing, all very cohesively.  Minus Sara’s father.  He was absent the entire day we spent with her; when I asked as to his whereabouts, Sara’s mother commented that we had likely been drunk the entire day  Sara then informed me that her husband, with whom she is separated, is no different.  In regions with poor economic opportunities, alcoholism is rampant.  In fact, it is so stigmatized here that many locals I’ve met, doctors, nurses, teachers… they all steer clear of drinking alcohol, for fear of quickly becoming dependent.  When I ask them why, they sound more like recovered alcoholics at AA rather than people who never touch alcohol for fear of becoming “boozers.” 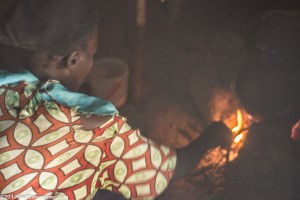 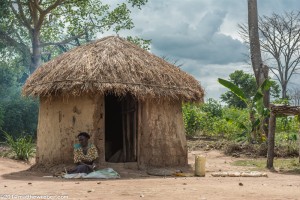 Interior and exterior of the kitchen hut that Sara and her six children sleep in every night.  Everyone helps, but Sara’s mother does most of the food preparation

Sara’s children were wildly amusing, climing up trees and trying to grab my attention any way they could.  One of her children, her second youngest, has the worst case of worms I have seen.  The Health Clinic Committee Chairman came to check up on me, and when he did, he took a look at the child.  Her belly button was forced out well over half an inch, if not more.  Davis, my translator, normally works running a clinic in another district and has extensive experience performing lab cultures on infectious outbreaks.  When I asked him how much the treatment would cost for Sara’s child, he told me the cost was $10 USD.  But, he said , the issue is more complicated than that.  If a child or adult eats a fruit with the worm parasite, they pass it out in their stool.  Many of the children, too poor to afford shoes, use the latrines and the parasites enter their body through their feet.  So, even if one were to provide the treatment for the parasite, odds are the children would get it again.  This is just one of the band-aid scenarios facing medical providers in Uganda. 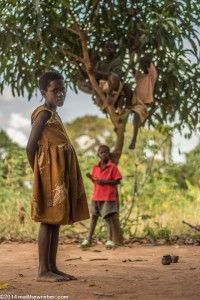 Sara’s children on a family tree

If a medical clinic is off the electrical grid, storage of life saving medication is pretty difficult given the lack of refrigeration.  On my last trip to Uganda, we spoke with a district health officer at Sapiri Health Clinic, who told us maternal fatality rates while giving birth are high in Uganda, and part of the reason is a lack of electricity in many clinics, compounded by the fact that most women here give birth at night.  No one can explain it, but every nurse and midwife I’ve spoken to says it’s true.  Most women won’t make the walk from their homes to the clinic if they go into labor to deliver under candle light.  The women who do make it to the clinic are usually required to bring their own parofine candles and karosine fuel.  This is an exceptionally expensive request, given the monthly income of these families is well below a dollar, and a liter of karosine costs over $2. 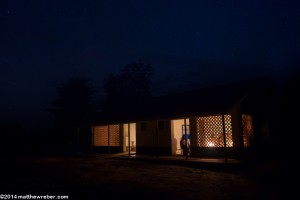 So, many avoid going out of shame for not having resources enough to buy the fuel.  Some go, but still, giving birth with a midwife under candle light is only marginally better.  For anyone who has been in a delivery room, the thought of a candle in close proximity to the birth canal is a recipe for disaster. 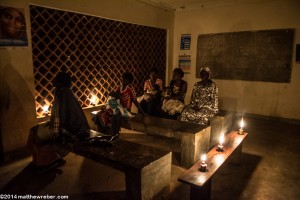 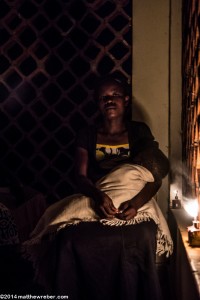 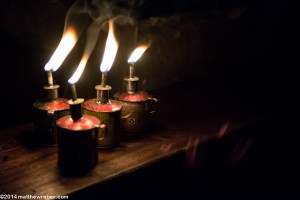 Sara and a few other mothers and pregnat women agreed to do short interviews by candle light in the clinic.  I’d never done an interview by candle light, and I have to say, the kerosine fumes were terrible.  Ignoring the dynamics of the camera’s sensitivity to light, I needed six candles to see them with my eyes.  One mother described walking 10km while going into labor to Nabigwali health clinic, where IA has a solar panel system, so that she could give birth in proper light.  She was the only mother present who had ever given birth under an electric light bulb. 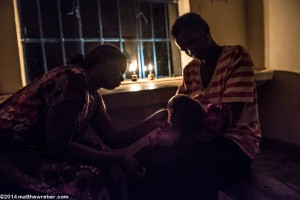 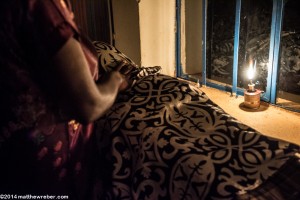 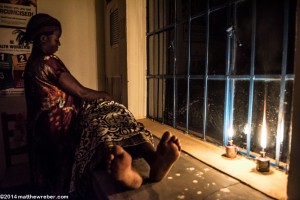 Rose, the clinics midwife, showed me what an exam looks like for an infant and mothers under candle light.  It was harrowing.